You are here: About

Consort develops a wide range of high technology products from simple and robust field-meters up to sophisticated precision laboratory equipment.

Consort started building electronic organs in a small village near Gent. Luk De Ceuster, being an engineer in electronics, was also a professor in a highschool for chemical engineers, formally know as the ‘Brewery School’. One day his colleagues asked him to build some pH meters because, at that time, the school could not afford very expensive imported meters.

1972
The first Consort pH meter was built with the best possible detail and refinement. Although there was no high-tech equipment available, it wasn’t just some simple meter in a wooden box but a genuine professional instrument.

Front plates were silk screen printed by hand and were built in a metal cabinet. The whole instrument was designed for being easy to use.

These little details and resourcefulness made the difference. The colleagues where very happy and also other scientists wanted such a pH meter.

1975
The first electrophoresis power supplies were developed with the help and cooperation of several Dutch universities. Electrophoresis apparatus followed later.

1998
Introduction of graphical displays on all meters.

2003
Development of the first computer controlled data-logger for up to 28 pH/ORP/Ion or conductivity channels.

Introduction of combination meters with common inputs for all types of electrodes.

He is now responsible for the development department following the same principles as before: a strive for excellence.

2010
New improvements where found and introduced such as sophisticated meters capable of connecting to a network, with an optical isolated USB, user specified buffer tables.

Many more new ideas are ready for implementation.

2012
For the past 6 years Jan has been working together with his colleagues on new products, setting paths for new improvements in the future.

In the meantime Jan learned all about managing Consort and is taking over from Luk and Lutgart, his parents, very soon.

I would like to thank you all for your trust on our products. 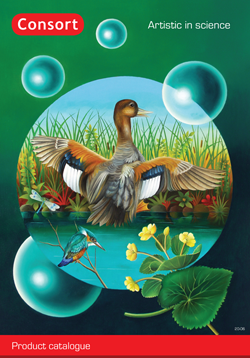